Although we may not like rules and regulations, we often find it easier to get things done when there are guidelines to follow. The same goes for our dogs. They appreciate knowing where the boundaries are, and in fact are less stressed when they have a leader to follow.

Dogs are pack animals. Your dog’s pack consists of you and your family. Each member of the pack has their own place in the hierarchy, with the alpha at the head. It’s important that you establish yourself as the alpha member in your pack.

Dogs are happier and less stressed when they have a leader to follow. Many behavioral problems that occur in dogs are due to the lack of a strong leader. Problems also occur when a dog is taken from his litter to early and then not properly socialized during puppyhood. These dogs often don’t understand doggie communication, and have issues with leadership as adults.

Many people are hesitant to be assertive with their rescue dog because they feel that he has had a rough life, and they should be gentle with him. They are reluctant to be firm, because they don’t want to stress him. The truth is, your dog wants guidance. He wants to know that you’re his leader, it helps him feel secure. Establishing Yourself as Pack Leader

If you don’t adopt the role of your dog’s pack leader, you’ll find that he will take over that position for himself. This can lead to behavioral problems such as aggression, and also higher levels of anxiety.

Being pack leader doesn’t mean you have to be loud and harsh to your dog. It means being fair, even tempered and consistent. It is a leader’s job to set your dog’s boundaries, protect your pack and control resources like food and toys.

When you bring home a rescue dog, you must start as you mean to go on. Although you can expect a few teething problems, don’t make allowances for the fact he’s new to your family. Start teaching him straight away what the rules are. Use positive training methods, and repeat your training sessions regularly, and he’ll quickly learn what he can and can’t do.

You can set physical boundaries, such as having certain rooms that your dog isn’t allowed in, or not permitting him into your kitchen. You can also set mental rules, such as teaching that he’s not allowed to bark for attention. Both are an important part of teaching your dog where he fits into your pack. There is a school of thought that suggests that bad behavior in our dogs is due to them trying to dominate us. Some dog owners believe that to be an effective leader, you have to show dominance over your dog with techniques such as the “alpha roll”. To do an alpha roll, you physically force your dog onto his back and hold there until he relaxes.

Other alpha exercises include scruffing and shaking your dog, growling at your dog, or forcing him onto his side and letting get up.

Many people believe that when your dog relaxes in an alpha roll, it indicates that he has submitted to you, and recognizes you as leader. This dominance theory is no longer accepted by many professionals. In fact, techniques such as the alpha roll may actually lead to your dog being aggressive towards you because he is frightened.

The American Veterinary Society of Animal Behavior suggests that dogs don’t behave badly because they are trying to dominate their owners. Instead they feel that dogs are naughty for two reasons. Firstly, they haven’t been consistently taught right from wrong, and secondly, they are afraid or anxious and that leads to bad behavior such as aggression. Research has shown that if you aggressive to your dog, he is more likely to be aggressive.

There’s no need to perform the alpha exercises on your dog. They are scary, they don’t teach your dog anything and they may result in you getting bitten.

Teaching Your Dog Who Is In Charge

There are many ways that you can show your dog that you are in charge, and they don’t involve getting physical with him, or causing him any fear at all. You’ll end up a better mannered dog, and a much more enjoyable relationship with him. After all, who wants to have their dog afraid of them?

– You must eat your food before your dog has his meal. Pack leaders eat first.

– You must go through a doorway before your dog does. Teach him to sit and wait, and not to follow you until he’s told to.

– If your dog is lying in the way, don’t step over him, ask him to move. After all, you are the leader.

– Teach your dog to sit and wait for his meal, and not to eat until you give him the command. Pack leaders control access to resources such as food.

– Until your dog recognizes you as leader, don’t invite him to sit on the couch with you, or to sleep on your bed. When he fully understands that you are in charge, you can then invite him to join you if you wish.

– Don’t reward your dog for jumping up, or other attention seeking behavior. Ask him to sit politely, and only then does he get a pat.

– Train your dog in basic obedience, and expect him to do as you ask him, when you ask him. Regular training will reinforce your position in the pack.

As you can imagine, these methods take more time and effort than physically scruffing your dog and rolling him on his back. However, they are more effective in showing you dog that you’re in charge, and will result in your dog respecting you instead of fearing you.

There is a training method called “Nothing in life is free”. Basically, this means that anything your dog wants, he has to earn. He wants to play? That’s fine, but he has to sit before you throw the ball. He wants to eat? No worries, but don’t give one piece of food until he’s performed a sit-stay exercise.

It’s not hard to show your dog that you’re his pack leader, and you can do it without causing him any anxiety or fear. He will feel happier and more secure, knowing he has a leader that he can respect. 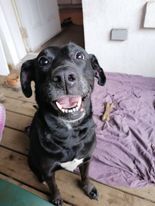