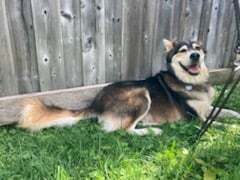 I've been named Wolff by my rescuers. You see, I'm a husky mix who was found roaming the streets of... View full description »