My name is Bert and here’s my story…

I came to Sophie’s Dog Adoption at the age of 8 weeks old after I was found during a police raid in a town that banned Pitbulls. Despite my young age, I was given a death sentence. The vet who was to perform my execution, knowing I was an innocent victim, called Sophie to save my life. This was now almost 4 years ago.

At the age of three month, I found what Sophie hoped would be my forever family, but they had lied to her claiming Pitbulls were not banned in their town. Goofy as I am, I decided to explore the neighborhood and to play hide and seek in someone’s backyard. They didn’t find it funny and called the city to report a Pitbull in their yard. That led the city to seek me out, bring me home and proceed with an eviction notice.

Having ten days to get out of the city, my family called Sophie and admitted having lied about the Pitbull ban and despite the fact that Sophie was very upset, she took me back and swore to find me a real forever home.

The family she found wanted a perfect dog and she knew I was exactly the right dog for them despite their “prejudice” against “us vicious killer dogs”, she gave them the opportunity to take me in and see how perfect I truly was. I’m very vocal and intimidating when I play which made them nervous at first, so Sophie came to work with them on getting to know my body language and showing them how sweet I really was. She warned them of the judgments, dirty looks, refusal from friends and family to come over and gave them plenty of time to make sure they were ready to cope with the fact other people would be prejudice, the adoption contract was officially signed and I became their Romeo.

For a year I was that Romeo, I went from a teenager to an adult and became more dominant and rough in my play with other dogs and my Mom was banned from the dog park. We were no longer welcome there and I guess the others ruled the park. That being said I started becoming more and more frustrated of having no friends to play with so I started wanting to go see dogs I met while on walks. Being very vocal it scared people and again my Mom started getting the look.

All that to say she did everything wrong by tugging me away, crossing the street, avoiding other dogs and forgot all the training Sophie had given her and in the end I was dragging her down the street to go meet some dogs. So what do you think happened next? Sophie got the call saying I had to go, “the true Pitbull, vicious killer” personality was coming out in me and I had to go.

Bottom line is she would rather keep going to the dog park with my “siblings” (little dogs) then to have people give her the look. So I came back to Sophie’s and I truly am the best dog ever, but I am a bully with other dogs. And the longer I stay here and share my space with other foster dogs, the more dominant I am getting with new dogs. I am also lacking exercise, but once I find that right family who will truly fulfill my needs (exercise, structure, discipline, love and attention), I will shine once again! 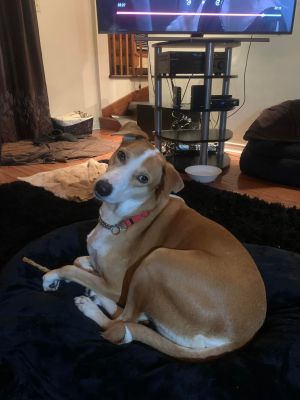